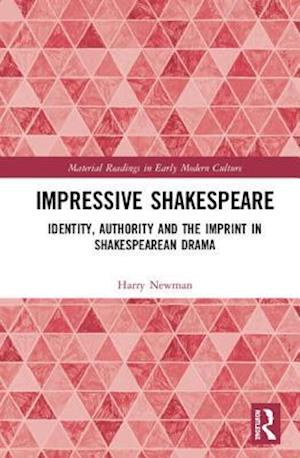 Impressive Shakespeare reassesses Shakespeare's relationship with "print culture" in light of his plays' engagement with the language and material culture of three interrelated "impressing technologies": wax sealing, coining, and typographic printing. It analyses the material and rhetorical forms through which drama was thought to "imprint" early modern audiences and readers with ideas, morals and memories, and-looking to our own cultural moment-shows how Shakespeare has been historically constructed as an "impressive" dramatist. Through material readings of four plays-Coriolanus, A Midsummer Night's Dream, Measure for Measure and The Winter's Tale-Harry Newman argues that Shakespeare deploys the imprint as a self-reflexive trope in order to advertise the value of his plays to audiences and readers, and that in turn the language of impression has shaped, and continues to shape, Shakespeare's critical afterlife. The book pushes the boundaries of what we understand by "print culture", and challenges assumptions about the emergence of concepts now central to Shakespeare's perceived canonical value, such as penetrating characterisation, poetic transformation, and literary fatherhood. Harry Newman's suggestive analysis of techniques and tropes of sealing, coining and printing produces a revelatory account of Shakespearean creative poetics. It's sustainedly startling in its rereading of familiar lines - but the chapter I found most original is on Measure for Measure: Newman is the first critic to attempt to interpret the play's authorial status as part of its own thematic and linguistic interrogation of illegitimacy and counterfeiting. He makes authorship matter in a literary and creative, rather than a quantitative and statistical, sense. Impressive Shakespeare is a brilliant scholarly debut.- Emma SmithEditor, Shakespeare SurveyProfessor of Shakespeare Studies, Hertford College, Oxford