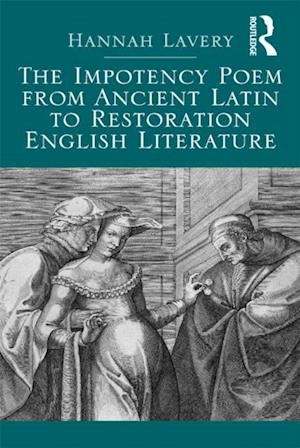 The first book length study of the motif of impotency in poetry from early antiquity through to the late Restoration, this book explores the impotency poem as a recognisable form of poetry in the longer tradition of erotic elegy. Hannah Lavery's central claim is that the impotency motif is adopted by poets in recognition of its potential to signify satirically through its use as symbol and allegory. By drawing together analysis of works in the tradition, Lavery shows how the impotency motif is used to engage with anxieties as to what it means to enact 'service' within political and social contexts. She demonstrates that impotency poems can be seen on one level to represent bawdy escapism, but on the other to offer positions of resistance and opposition to social and political concerns contemporary to a particular time. Whilst the link between the 'Imperfect Enjoyment' poems by Ovid and Rochester is well known, Lavery here looks further back to the origins of the concept of male impotency as degradation in the works of earlier Roman poets. This is an important context for considering how the impotency poem then first appears in the French and English vernaculars during the sixteenth century, leading to translations and adaptations throughout the seventeenth century. Lavery's close readings of the poems consider both the nature of the literary form, and the political and social contexts within which the works appear, in order to chart the intertextual development of the impotency poem as a distinct form of writing in the early modern period.