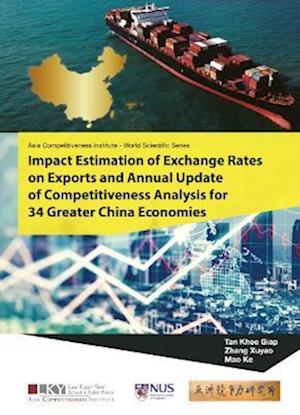 The Chinese economy has been playing an increasingly significant role on the global stage. This book is the sixth annual project of Asia Competitiveness Institute studying competitiveness at the sub-national level of Greater China. ACI's flagship competitiveness study not only adopts a comprehensive framework to measure competitiveness by incorporating 102 indicators under four environments and 11 sub-environments, but is also undertaken at the sub-national level to account for the considerable disparities within a large economy like Greater China. The comparative strengths and weaknesses based on the scores and rankings as well as the what-if simulation analysis can be used to formulate development strategies that are specific and of practical value for each sub-national economy and region.The Shapley methodology adopted by ACI introduces a novel approach for the assignment of weights to the various indicators that constitute competitiveness. This concept has introduced an element of objectivity in terms of the assignment of weights. The findings using the Shapley value also tend to validate the robustness of results obtained from the competitiveness studies over the past years.Moreover, the empirical research featured in this book attempts to understand the drivers of exports of Mainland China provinces, with a specific focus on real effective exchange rate movements and volatility. Nowadays with the international flows of goods and capital becoming ubiquitous and comprising an important aspect of national competitiveness, the role of exchange rate is drawing much more policy attention. In view of this, the research findings presented in this book make an important academic and policy contribution by empirically examining the relationship between exports and exchange rate.Finally, the timing of this publication makes it indispensable to include some dedicated discussions of the trade disputes between the US and China. Several topics would be discussed in this book, including China's protection on Intellectual Property Rights, its violation of World Trade Organisation rules, challenges to its economic growth, the development of its three regional megalopolises, and how to mitigate the impact and ramification of its trade war against the US. This book attempts to identify the growing concerns in the US-China trade tension and provide suggestions for China's development in the future.