- The Federalist Society and the Conservative Counterrevolution 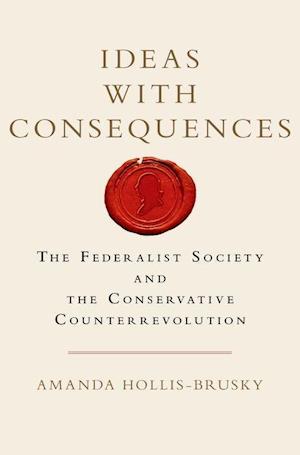 The Federalist Society, which has been in existence for three decades, is one of the most successful intellectual movements in modern American political history. It began as a relatively small organization of conservative lawyers dedicated to eroding the national government's power in virtually every arena except defense and enhancing the power of states vis-a-vis the federal government. It now has 40,000 members, including four Supreme Court Justices, dozens offederal judges, and every Republican attorney general since the 1980s. Indeed, when Republican presidents have nominated judges, Federalist Society membership has served as the seal of approval. The Federalist Society's influence on American politics is well-known. But how, exactly, does it exert that influence? In Ideas with Consequences, Amanda Hollis-Brusky brilliantly traces how the Federalist Society does this. Drawing on a database of over 2,000 original and primary documents, including personal interviews with Federalist Society members, archival data, and a complete database of transcripts from Federalist Society National Conferences, Hollis-Brusky constructs the most completeand social scientific narrative of Federalist Society influence to date. In doing so, she shows how the Federalist Society serves as the hub of a complex circulatory system and how the ideas it generates have become the lifeblood of the conservative movement. In the areas of gun rights, campaignfinance, federalism, and state sovereignty, Hollis-Brusky demonstrates how the Federalist Society's investment in ideas, professional education, and networking has resulted in some of the most revolutionary Supreme Court decisions of the past three decades. Hollis-Brusky also illustrates the ways in which the Federalist Society network worked to help bring these constitutional revolutions about in the first place-by identifying, credentialing, and getting the right kinds of judges and Justiceson the bench, and by reducing the stigma associated with once-radical constitutional theories. Not only a rich story of the conservative legal movement, Ideas with Consequences also develops a powerful social scientific framework for analyzing the ways in which interest groups and networks influencelegal and judicial policy in America.