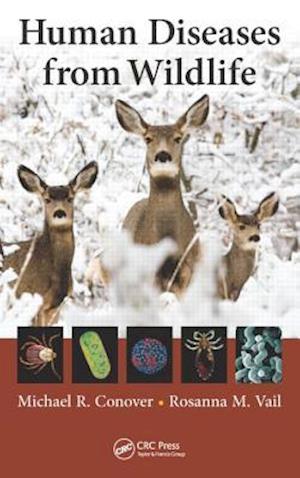 Human Diseases from Wildlife presents information on the most prevalent and serious zoonotic diseases in the US and Canada, some of which have been national headline news like anthrax, influenza, and West Nile virus. Diseases that are caused by pathogens with the ability to infect both humans and animals are known as zoonotic diseases, which literally means "disease from animals."The issue of human-wildlife disease interactions is a growing concern as humans continue to interface with wildlife. People who handle wildlife including field workers, wildlife professionals, trappers, and hunters want to know about potential diseases, risks, and how to protect themselves from disease. This book was written because many people are uninformed about zoonotic diseases. This lack of information causes some people to have a heightened fear of zoonotic diseases, preventing them from enjoying wildlife or spending time outdoors. Other people needlessly expose themselves to disease by neglecting simple precautions.This book includes information on bacterial, spirochetal, rickettsial, and viral diseases as well as macroparasites and emerging zoonotic diseases. More than two dozen diseases are covered including rabies, tularemia, baylisascariasis, salmonellosis, leprosy, Lyme disease, Rocky Mountain spotted fever, and swimmer's itch.Each chapter contains the history of the disease, symptoms in humans, medical treatment, transmission of pathogens to humans, the role of wildlife as vectors, and methods to minimize risk. The diseases people can contract from wild animals can be both threatening and fascinating, and the book includes interesting information to make it more enjoyable to read.