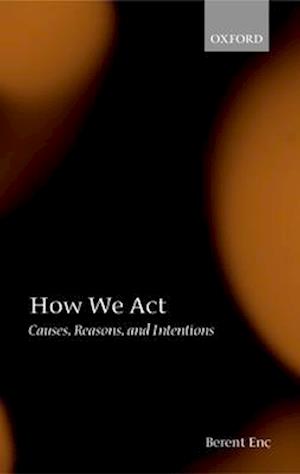 How We Act presents a compelling picture of human action as part of the natural causal order of the world. Berent Enc eschews any appeal to special capacities supposedly unique to rational agents, such as agent causation or irreducible acts of volition, and appeals to analogous positions in epistemology and the theory of perception, showing why it is a mistake to subscribe to such capacities.Although aspects of the causal theory of action have been adopted and defended by many empiricist philosophers, none has given as sustained and as thorough a defence as Enc offers in this book. His defence begins with a foundationalist definition of action that rests on a theory of basic acts, conceived here as derived from empirical studies of animal behaviour. Basic acts are complex units that agents acquire as part of their repertoire of things they can readily do - things with whichpractical syllogisms end.Having set out the details of his causal theory, Enc proceeds to propose solutions for two remaining problems. The first is a general and a complete solution to the problem of the so-called deviant causal chains. The second is a solution to the problem of "the disappearance of the agent". The causal theory presents the agent as a mere conduit for a causal chain - the agent seems to lose its active role. This problem is addressed by contrasting hard-wired and conditioned behaviour withbehaviour that is the result of deliberation, and a purely causal model of deliberative reasoning is provided.How We Act is careful to allay fears that its causal theory threatens our common-sense notion that we act of our own free will, but it remains highly provocative and original. Anyone working on human action, in philosophy and also in cognitive and behavioural psychology, will find much to stimulate them here.

Forfattere
Bibliotekernes beskrivelse Portrays action as belonging to the causal order of events in nature, a theory from which accounts of intention and voluntary action emerge. It is a useful read for philosophers and cognitive scientists alike. numerous figures