How To Draw Reptiles and Mammals : An Educational Guide 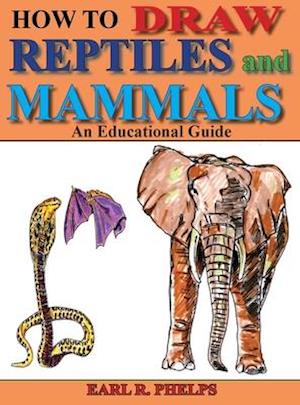 This book is a hardback version of my paperback book of the same name. Those of you who have great interest in reptiles and mammals will surely enjoy this new book. As a child growing up in Cleveland, my mother would take me and my brother to visit our grandmother in Macon, Georgia I had only one brother at the time, now I have two. During one of my summer visits while I was taking a nap, I saw a baby snake outside of the window on the branch of a brush. I became excited and jump out of the bed and ran outside. The snake was still there, I then proceeded to try and catch the snake. The baby snake glided from one branch to another with the swiftness of ease. I was surprised on have fast it was. I finally caught the snake and put it in a paper bag to show my mother and ask her could I take it back to Cleveland as a pet. You can probably guess what her answer was. One person said it was a baby rattlesnake, someone else said it was probably a rat snake. I believe it was the later, I didn't see a rattler on that snake. As you may have guessed, I returned to Cleveland without the snake

This book is a combination of two of my previously books, "How to Draw Spectacular Reptiles" and "How to Draw Magnificent Mammals" it will not only focus on teaching you on how to draw the most interesting reptiles and mammals in the universe, but will give you some educational information about each species.

In this book, like in my previous books, I've created many step-by-step illustrations showing you how to draw these dynamic reptiles and mammals of the world. This book isn't wordy because as most of us know, a picture is worth a thousand words. So this book must contain over a million invisible words. As you learn from this book I want to give you a guide line tip. When I draw the creature's body, most of the time I'll start with the head then proceed to draw the neck, other parts of the figure and so forth. On some occasions depending on how I plan to position the figure, I would draw that part of the anatomy first.

To truly become good at anything in life, you have to study, visualize, and perform, in other words, practice, practice, and more practice, ain't nothing to it, but to do it!