How to Count It All Joy 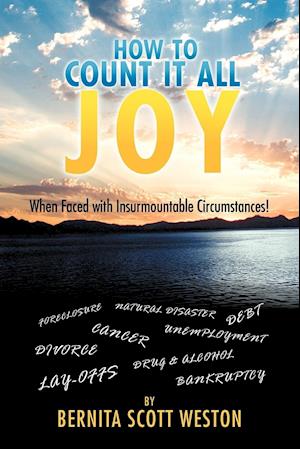 In September 2002 she married the man of her dreams. In June 2005 they purchased their home in paradise. It was the perfect love nest, the kind of home most people can only dream about. Their private get-a-way was nestled in 5.75 acres of plush exotic land, with a towering forest of landscape and natural habitat, overlooking several creeks and streams with breath taking sunset views from every angle. It was secretly hidden from the world, a place where deer's and rabbits seek refuge; where the falcons soared and roamed freely without fear of discovery. It was the summer of their lives, with a newly built wrap-around deck that lit up the night. They were the envy of all their friends and neighbors. Until one day the perfect dream they once shared came crashing down around them! Their once perfect marriage would be put to the test. Voluntary humility is an honor and privilege best served with a willing, sincere and open heart. To be humbled by God, is an indescribable devastation of heartache and pain for which they would soon discover. September 2009 the flood they once mocked and avoided two years prior, returns with a wicked vengeance, only this time it would take most of the city and their home in paradise with it! Being homeless with only the clothes on their backs, they did not sin nor did they charge God with wrong. They were hard-pressed on every side, but not crushed; perplexed, but not in despair; persecuted, but not forsaken; struck down, but not destroyed. In this faith based book, Bernita Weston shares with the world how they were able to turn their tragedy into triumph. Find out, "How to Count it ALL Joy, When Faced with Insurmountable Circumstances!"