How States can Outlaw Abortion in a Way that Survives Courts 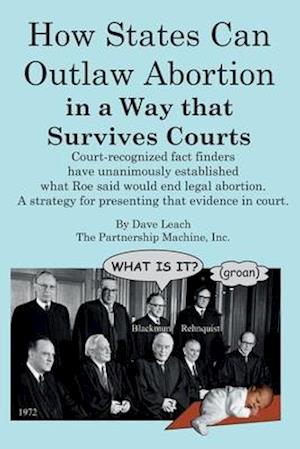 An irrefutable legal argument, that court-recognized fact finders have unanimously established, already, what Roe said would "of course" end legal abortion, attached to any law against abortion, can get it through courts, with the help of the right political pressure. The legal argument doesn't rely on more scientific evidence of "when life begins" from a world class geneticist or doctor. (Although an updated overview of the evidence would probably be part of a court challenge to criminalizing abortion.) The scientific fact that all unborn babies are humans, by itself, has been ignored, and will be ignored. (See "Why Courts Ignore Evidence", Part 1, p. 25, for a short history of those cases.) What can't be ignored is the fact that thousands of expert witnesses in tens of thousands of abortion prevention trials already established the fact that all unborn babies are humans/persons and they were never challenged. Never contested. Part 2, p. 11.What can't be ignored is the fact that those uncontested thousands were not the only court-recognized establishers of the fact that "life begins" at fertilization/conception. Expert Witnesses are but one of five categories of court-recognized finders of facts who unanimously took that position. The other four: juries, state legislatures, Congress, and individual judges. No American legal authority ever found that "life begins" any later. (Part 2, p. 8-19)This legal argument does not rely on another isolated "personhood law" like laws already passed in about 30 states(Part 2, p. 12) and by Congress. (Part 2, p. 17) (Including laws that don't use the word "person" but which say unborn babies are humans or "homo sapiens"; Roe equates the two - see Part 2, pp. 43 and 167) (See "Why Courts Ignore Personhood Laws that do not Include Criminal Penalties"(Part 1, p. 33) Nor is it a Constitutional Amendment which would, like a "personhood" law, establish a fact as legally recognizable, or true as a matter of law - something never done before by any Constitutional Amendment. Roe didn't rule that unborn babies are not "persons" as a matter of law, which makes the fact that they are humans/persons, so that killing them is murder, irrelevant. Dozens of appellate courts said Roe said that, but that is absurd, erroneous, and is fortunately the opposite of what Roe said. (Part 2, p. 57)If the fact that we are people could be made irrelevant because "as a matter of law" a court is "in no position to speculate" whether we are people "within the language and meaning of the 14th Amendment", slavery would still be legal. The Constitution protects those who are in fact people. (Part 2, p. 32)Roe also makes abortion's legality subject to whether babies are in fact humans. (Which makes them "persons", Roe said.) It is whether the unborn are "persons" as a matter of law, that is irrelevant. (See Part 2, p. 51)