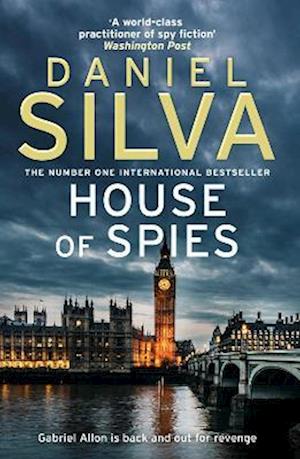 Gabriel Allon is back and out for revenge From the No.1 New York Times bestselling author of The Black Widow comes the thrilling new blockbuster featuring legendary spy, assassin and art restorer Gabriel Allon. Legendary spy, assassin, and art restorer Gabriel Allon is back and out for revenge - determined to hunt down the world's most dangerous terrorist, a shadowy ISIS mastermind known only as Saladin. Four months after the deadliest attack on the American homeland since 9/11, terrorists leave a trail of carnage through London's West End. The attack is a brilliant feat of planning and secrecy, but with one loose thread: the French-Moroccan street criminal and ISIS operative who supplied the combat assault rifles. The thread leads Gabriel Allon and his team to the south of France and to the doorstep of Jean-Luc Martel and Olivia Watson. A beautiful former fashion model, Olivia pretends not to know that the true source of Martel's enormous wealth is drugs. And Martel, likewise, turns a blind eye to the fact he is doing business with a man whose objective is the very destruction of the West. Together, under Gabriel's skilled hand, they will become an unlikely pair of heroes in the global war on terror. Praise for Daniel Silva: 'A tense, thrilling adventure' Huffington Post 'A truly talented writer' Sun 'Fascinating, suspenseful, and bated-breath exciting' Publishers Weekly 'It is Silva's creative genius that keeps it all moving, as well as his mastery of storytelling that keeps the intense momentum of the plot ever pushing forward' Huffington Post 'Allon is the 21st century Bond - elegantly paced, subtle and well-informed.' Daily Mail 'Sexily brooding Allon... must be the most famous superspy not played by Daniel Craig' Daily Telegraph 'Silva builds tension with breathtaking double and triple turns of the plot' People 'A world class practitioner of spy fiction' Washington Post 'Silva is a master of suspense' Barbara Taylor Bradford, The Week

Forfattere
Bibliotekernes beskrivelse Gabriel Allon is back and out for revenge From the No.1 New York Times bestselling author of The Black Widow comes the thrilling new blockbuster featuring legendary spy, assassin and art restorer Gabriel Allon.