Horror Plays of the English Restoration 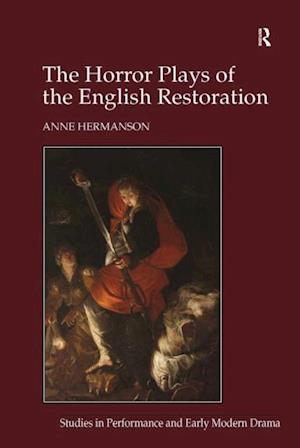 A decade after the Restoration of Charles II, a disturbing group of tragedies, dubbed by modern critics the horror or the blood-and-torture villain tragedies, burst onto the London stage. Ten years later they were gone - absorbed into the partisan frenzy which enveloped the theatre at the height of the Exclusion Crisis. Despite burgeoning interest, until now there has been no full investigation into why these deeply unsettling plays were written when they were and why they so fascinated audiences for the period that they held the stage. The author's contention is that the genre of horror gains its popularity at times of social dislocation. It reflects deep schisms in society, and English society was profoundly unsettled and in a (delayed) state of shock from years of social upheaval and civil conflict. Through recurrent images of monstrosity, madness, venereal disease, incest and atheism, Hermanson argues that the horror dramatists trope deep-seated and unresolved anxieties - engaging profoundly with contemporary discourse by abreacting the conspiratorial climate of suspicion and fear. Some go as far as to question unequivocally the moral and political value of monarchy, vilifying the office of kingship and pushing ideas of atheism further than in any drama produced since Seneca. This study marks the first comprehensive investigation of these macabre tragedies in which playwrights such as Nathaniel Lee, Thomas Shadwell, Elkanah Settle, Thomas Otway and the Earl of Rochester take their audience on an exploration of human iniquity, thrusting them into an examination of man's relationship to God, power, justice and evil.