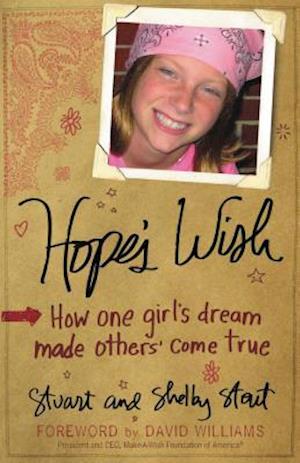 One courageous girl used her final wish to fulfill the wishes of 155 other children. When Hope Stout was diagnosed with bone cancer, the Stouts prayed for a miracle. The miracle occurred, but not in the way the Stouts expected. Instead this young girl asked for what seemed to be impossible-that one million dollars be raised in a month to fund the wishes of all the children on the Make-A-Wish Foundation's list for Central and Western North Carolina.Shelby and Stuart Stout felt led to write A Legacy of Hope after compiling a journal of the 191 days from Hope's diagnosis to her death. Both parents were with Hope every step of the way on her journey from a healthy preteen to being dependent on crutches to eventually being bedridden. Their heartfelt story includes the times when they were angry and desperate, as well as the times when Hope's humor and spirit shone through.Academy Award winning screen writers Diana Ossana and Larry McMurtry are developing the screenplay for Hope's Wish with an expected production date sometime in 2013.