- The Single Franchise Baseball Stars of the 20th Century 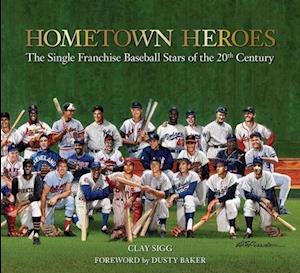 Throughout the history of baseball, over 18,000 ballplayers have seen action in a major league uniform, yet only 177 men have spent their entire big league careers exclusively with a single team. Playing an entire career with one organization is an extraordinary achievement. Hometown fans have always reserved a profound respect and affection for players who have stayed with their team from start to finish. Almost to a man, these lifetime ballplayers are modest, humble, team-oriented, high character individuals. Such traits emerge so consistently in these foundational players, it is no surprise that their hometown fans maintain such a strong bond and special connection with them. The men in this select brotherhood are among the most influential and beloved players in the American Game. Within their storylines resides the essential history of big time baseball in the 20th century. Already 50 of these special players have been enshrined at Cooperstown in the National Baseball Hall of Fame, with more to come. These one-franchise major league warriors are worthy of special tribute. They have honored baseball by the respect they have shown for the game. This kind of hero is not extinct, but is an increasingly endangered species. That is even more reason to celebrate the triumph and symmetry of a long career begun and finished with a single team. Hometown Heroes pays homage to this rare and exceptional fraternity.