- Stena and Its Welsh Heritage 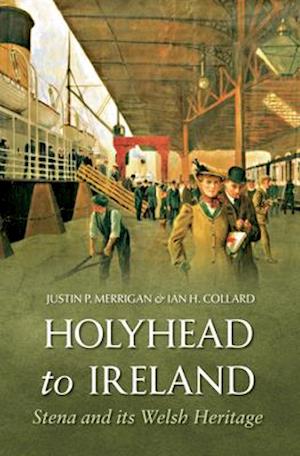 The Port of Holyhead has a long history and is now operated by Stena Line Ports Ltd. The company took over ownership of the port from Sea Containers in 1990, which only six years previously assumed control of the harbour as part of the Sealink privatisation. Ranked as the United Kingdom's third-busiest ferry port, after Dover and Portsmouth, Holyhead handled a remarkable 1.9 million passengers in 2009. The operation is an impressive one, with world class tonnage operating for both Stena Line and Irish Ferries on sailings to Dublin Bay. In addition, cruise ship traffic continues to develop and grow and, with the recent availability of the Anglesey Aluminium jetty to the largest cruise ships, the future looks bright for this new trade. In Holyhead to Ireland, the authors aim to place on record the heritage on which today's successful port and trade is built - the era of railway ownership, for it is without doubt that Holyhead and the Stena Line routes to Ireland of today owe their existence to the railway companies of yesteryear. And why should the railways find themselves operating ships? Simply, they saw the benefits of extending their operations beyond the buffers! Co-ordinating rail and sea traffic for passengers, mail and cargo, they built first-rate ships and developed state-ofthe- art port facilities, pushing aside the irregular and unreliable services that had been run in a rather less than perfect fashion. Justin Merrigan and Ian Collard tell the story of the port in words and pictures, from the establishment of a harbour to the present day, from sailing packets that took a day or more to make the short crossing to the super-fast catamarans and the Irish Sea's largest ferries of today that can make the journey in less than two hours.

Forfattere
Bibliotekernes beskrivelse This fascinating story of the Port of Holyhead from its earliest beginnings to the present day. 214 Illustrations, unspecified