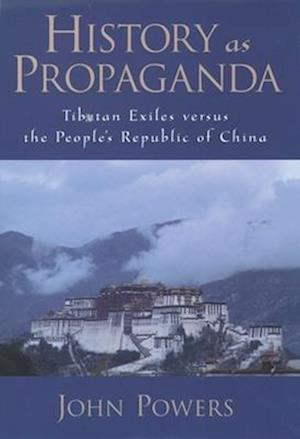 Despite Chinese efforts to stop foreign countries from granting him visas, the Dalai Lama has become one of the most recognizable and best loved people on the planet, drawing enormous crowds wherever he goes. By contrast, China's charismatically-challenged leaders attract crowds of protestors waving Tibetan flags and shouting "Free Tibet!" whenever they visit foreign countries. By now most Westerners probably think they understand the political situation in Tibet. But, John Powers argues, most Western scholars of Tibet evince a bias in favor of one side or the other in this continuing struggle. Some of the most emotionally charged rhetoric, says Powers, is found in studies of Tibetan history. History is viewed by both sides as crucial to their claims, and both invest a great deal of energy in producing works that purport to tell the "truth" about Tibet's past. Powersshows that the two sides' views are mutually incompatible and that both sides sincerely believe what they say. Both are operating within a particular psychological context in which certain assumptions guide their inquiry and predetermine their conclusions. Both are so thoroughly convinced of theutter rightness of their paradigms that they cannot even imagine that someone might sincerely hold the opposing view, and so they accuse their opponents of deliberately lying and covering up the "facts" and the "truth." Both reflect the vastly different cultural myths of the societies that produced them. Chinese sources begin with the notion that China is at the center of the world and is the only civilized society, with a mandate to rule over all other countries. Tibetan records arethoroughly infused with Buddhist imagery and presuppositions, and the underlying narrative is the diffusion and glorification of religion. Powers examines works on Tibetan history by Tibetan and Chinese authors that have been produced in English for Western consumption. He finds some of their claims absurd, others highly implausible, some humorous in an unintended way. Both narratives are fraught with internal contradictions and inconsistencies. And even the most ridiculous notions, Powers notes, are often reflected in works by contemporary Western academics. Powers's impartial examination of the competing narratives will help usto better understand the issues involved in debates about Tibetan history-why apparently arcane vestiges of the past are so important to both Tibetan and Chinese nationalist narratives.