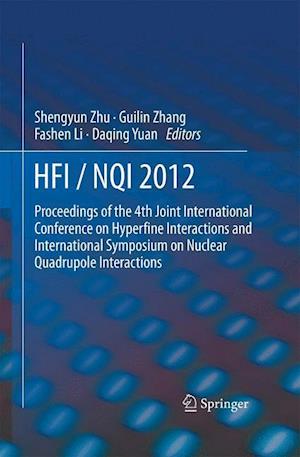 Proceedings of the 4th Joint International Conference on Hyperfine Interactions and International Symposium on Nuclear Quadrupole Interactions, HFI/NQI 2012 held in Beijing, China, September 10-14, 2012. The hyperfine interaction between the atomic nucleus and the surrounding charge distribution and the magnetic fields at the site of the nucleus remains a topic of high scientific interest. To this we have to add the field of nuclear quantum optics where the hyperfine interaction takes place between the atomic nucleus and synchrotron radiation. The study of this hyperfine interaction allows to shift the existing borders of scientific insight both in the properties of the atomic nucleus as in the properties of the solids and liquids in which it is imbedded. The 47 scientific contributions in this book describe studies presented at the HFI/NQI2012 conference. These studies are devoted to topics such as nuclear moments, nuclear polarization, fundamental interactions, magnetism and magnetic materials, semiconductors, metals, insulators, practical applications, developments in methodology and new directions in the field of hyperfine interactions.