Hew Ross of the Chestnut Troop 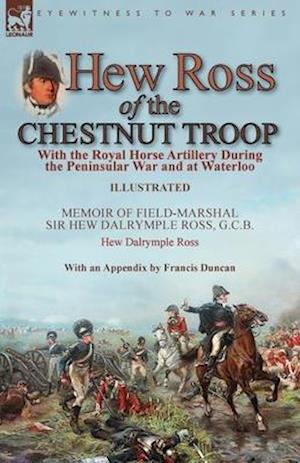 There are few images of the British Army in battle against the French Army of Napoleon Bonaparte that are more evocative than the Royal Horse Artillery in action. The principal work in this book is the memoir of one of the most renowned RHA officers of the period, Hew Ross who commanded the famous Chestnut Troop. In 1809, Captain Ross’s guns were attached to the legendary Light Division, commanded by the truculent Robert Craufurd, which ensured they were always in the vanguard of the army in Portugal and Spain. The troop fought at the Coa, Bussaco, Pombal, Redhinha, Casal Novo, Sabugal and Fuentes de Onoro. As a major Ross was present at the fall of Ciudad Rodrigo and the siege of Badajoz. As the tide of war went against the French, Ross and his gunners fought at Salamanca, Vitoria and the battles of the Pyrenees to the close of the war. Promoted to lieutenant-colonel and knighted, Ross fought at Waterloo in 1815 and took part in the pursuit to Paris. This Leonaur edition book contains illustrations which were not present in the original text and is enhanced by an essay on the history of the Chestnut Troop, RHA.