Heroes of Summervale Omnibus One 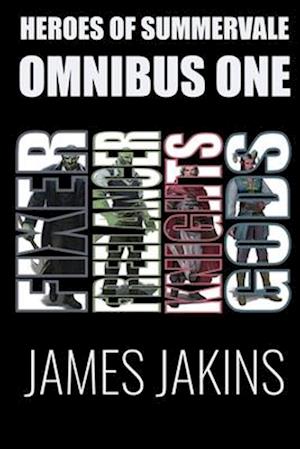 Jack Bloodfist and Mikaia Goretusk are orcs, and they have a story to tell you.

Jack Bloodfist fixes things. That's what his card says, anyway. When the orcs and goblins of Summervale need something done they call Jack.

He's always believed himself capable of fixing any issue his extended family needs fixed, even those they create for themselves, but when a powerful paladin comes to town and starts killing orcs, Jack may be out of his depth.

Then there's the case of a stolen spear that takes Jack from small Southern towns to an elf king's court, to the rooftops of New York City. Jack's gonna have to call in every favor he has if he wants to make it out the other end in one piece.

But his is only half the story. His niece, Mikaia Goretusk, will tell the rest.

The half-orc girl, Mikaia Goretusk, has been torn from her world and thrown into one full of untold dangers. Her only protector is Arthur Shield, knight of the dead god Saban, once sworn to kill everyone she has ever cared for.

The two will journey through Domhan, a world of magic and dark gods, through lands filled with heroes and villains. All to get the girl home.

And while they may never find an end to their journey, together they may find a form of redemption.

This collection includes the first four novels in the Heroes of Summervale series, including the first two Jack Bloodfist Novles: Fixer and Freelancer. And the first two Novels of Broken Redemption: Knights of the Dead God and Gods of the Broken Sea.