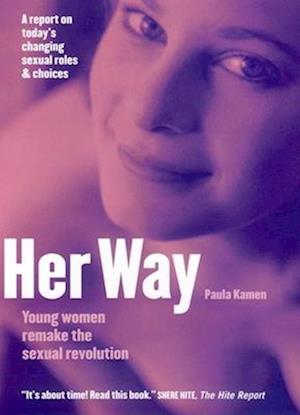 Visit Paula Kamen's website at http://www.paulakamen.com Three decades after the Sexual Revolution, women's power and status have begun to match men's, and women are finally making the rules in order to experience a more radical and truer form of liberation. Her Way demonstrates how and why 20- and 30-something women have evolved to act and think more like men sexually, while also creating their own distinct sexual patterns and appetites. Today's young women are now the leaders of an unreported but sweeping "Sexual Evolution," in which women take control of sex and redefine it from their perspective. In other words, do it "her way." Paula Kamen characterizes this Sexual Evolution according to two major developments that are setting sexual patterns for future generations of women: young women's sexual profiles are now remarkably similar to those of men, in terms of age of first intercourse, and numbers of sex partners and casual encounters. They also feel less guilt or shame about their behavior, from premarital sex to having a child out of marriage to coming out of the closet to cohabiting. Yet young women are not merely imitating men, but forging their own distinct sexual perspectives and asserting their own needs. In addition to discovering the pleasures of sex, young women are also exploring the dilemmas, challenging male-defined sexual scripts, and changing what actually goes on in bed. Based on more than one hundred lively, unfiltered and in-depth interviews with women across the country, Her Way cuts through the sensationalism and speculation of popular discussions about young women and sex. Kamen reports the real story of today's enhanced sexual expectations and choices.