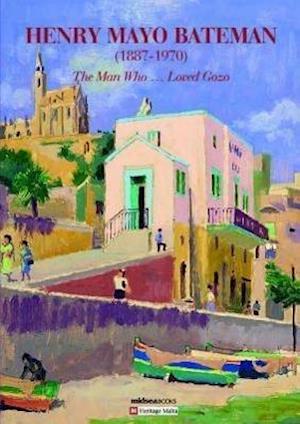 Malta and Gozo of the sixties must have carried some distinct appeal as artistic and creative celebrities were attracted to visit regularly or actually reside here. Among others these included authors such as: Anthony Burgess, Desmond Morris, Nigel Dennis, Ernle Bradford; architects of the stature of Sir Basil Spence and Quentin Hughes; leading artists such as Victor Pasmore, Julian Trevelyan, Mary Fedden; composers such as Albert Ketelby and Irving Szathmary; designer Mary Farrin and entrepreneur Richard Branson. Indeed even David Bowie sought his luck here when, in 1964, he took part in a song festival at St Julian's!Henry Mayo Bateman was among those who chose to settle here, spending the final years of his life in Gozo until his death in 1970. His years here were largely spent painting scenes of Gozo and Gozo-life. A renowned cartoonist who created"The Man who..." series, H. M. Bateman was a celebrity in his time and contributed to a wide range of publications from The Tatler to Punch to book illustrations to advertising artworks for leading brands.Apart from detailing the works on display, this catalogue also includes researched pieces on the artist by specialists Nicoline Sagona, Katya Micallef and Lawrence Pavia. The contributions offer an insight into the artist's career including his years in Gozo. Heritage Malta is proud that a number of H. M. Bateman's works are now in the National Collection and on display in this exhibition.In his 1937 autobiography Bateman confessed that...there is still something missing in which I could wish for fulfillment...I would like to have painted a quite serious picture, one that did not depend upon any sort of comic situation to make it appeal.....a landscape perhaps with just the way light falls on a house or a tree. He had yearned to paint ...the beauty of earth and sky and water. Gozo surely fulfilled him in this respect, earning him the informal title of "The Man Who ... Loved Gozo"!This monograph is the first study of the last years of this lovd British cartoonist and his works he did in Gozo, Malta.

Forfattere
Bibliotekernes beskrivelse Malta and Gozo of the sixties must have carried some distinct appeal as artistic and creative celebrities were attracted to visit regularly or actually reside here.