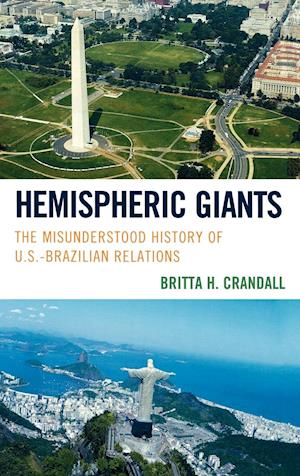 Tracing the full arc of U.S.-Brazilian interaction, Hemispheric Giants thoroughly explores the enigmatic and often-misunderstood nature of the relationship between the two largest countries in the Western Hemisphere. Britta H. Crandall asks the crucial question of why significant engagement between the United States and Brazil has been so scarce since the inception of the bilateral relationship in the late 1800s. Especially, she critically examines Washington's so-called "benign neglect"-a policy often criticized as unbefitting Brazil's size and strategic importance. Drawing on a rich array of archival sources and personal interviews, Crandall pinpoints the key examples through time of high-level U.S. policy attention to Brazil. Her comprehensive analysis of the ebbs and flows of policy engagement allows Crandall to tease out common threads among her cases. In so doing, she shows that the label "neglect," implying a one-sided, fitful relationship, is far from the reality of a mutual, ongoing policy engagement between the U.S. and Brazilian governments. To be sure, their different relative power positions and foreign policy traditions have limited high-level bilateral engagement. However, Crandall argues convincingly that the diminishing power disparity between the United States and Brazil is leading to closer ties in the twenty-first century-a trend that will bring about growing cooperation as well as competition in the future.