- The Truth Behind Familiar Quotations 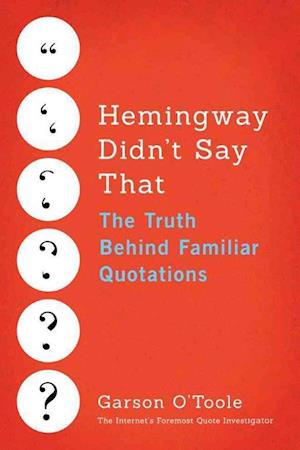 "Extensive and brilliant investigations...a tour de force of detective work...Mr. O'Toole is a beacon of accuracy who should inspire all readers who prefer their facts real rather than phony." --Wall Street Journal

Everywhere you look, you'll find viral quotable wisdom attributed to icons ranging from Abraham Lincoln to Mark Twain, from Cicero to Woody Allen. But more often than not, these attributions are false.

Garson O'Toole--the Internet's foremost investigator into the dubious origins of our most repeated quotations, aphorisms, and everyday sayings--collects his efforts into a first-ever encyclopedia of corrective popular history. Containing an enormous amount of original research, this delightful compendium presents information previously unavailable to readers, writers, and scholars. It also serves as the first careful examination of what causes misquotations and how they spread across the globe.

Using the massive expansion in online databases as well as old-fashioned gumshoe archival digging, O'Toole provides a fascinating study of our modern abilities to find and correct misinformation. As Carl Sagan did not say, "Somewhere, something incredible is waiting to be known."