Hell Hath No Fury, Volume 2 [Save the Witch : Scent of a Wolf] (Siren Publishing Classic ManLove) 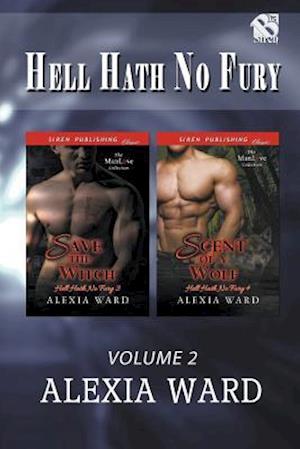 Save the Witch  [Siren Classic ManLove: Erotic Alternative Paranormal Romance, MM, vampires, HEA] Luca Valente is finally living his dream, touring the country with the witch he loves, Jax Crane. But just when he thought things couldn’t get any better, something happens that threatens to destroy everything he holds dear. There’s something not quite right with Jax Crane. A spell he cast has gone wrong, and he can’t fix it. An evil darkness grows inside him. It’s fighting to break free. To protect Luca, the vampire he loves, and everyone else, he runs away. Unable to let Jax go, Luca vows to find him and save him. With the help of his brother Victor, he sets out to search for the only witch powerful enough to save Jax. But this witch dabbles in black magic and has been waiting for Jax to turn to the darkness for quite a while. Will Luca be able to save Jax from the evil growing within him and the evil witch Luca sent to help him, the witch Jax calls Mother? Scent of a Wolf [Siren Classic ManLove: Alternative Paranormal Romance, MM, shape-shifter, werewolves, HEA] Remy Kruger, a private investigator and wolf shifter, has returned home on a case. A boy was abducted in Hell, Michigan. The police have found no leads. Remy’s the family’s only chance to find him before it’s too late. Boone Whistler is desperate to save his nephew. When someone refers him to a PI who’s notorious for finding missing children law enforcers couldn’t, he contacts him and begs him to take on his case.  Once he meets Remy Kruger, he’s intrigued. Boone didn’t expect Remy to be so good-looking or to act so mysterious and odd. Following a lead, Boone forces Remy to take him to the wolf shifter campground to meet the leader of the pack, Remy’s estranged father, who may know where the boy is. Humans are forbidden in their territory. Remy and Boone must pretend to be mates to protect Boone. Things quickly get intense between them. Can Remy protect Boone, who he’s beginning to care for, from his father’s wrath? Or will they be killed before they can get answers?