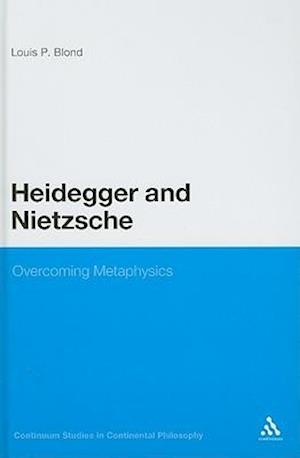 Heidegger and Nietzsche: Overcoming Metaphysics charts Heidegger course of the 1930s that culminates in his notorious confrontation with Nietzsche. During this period, Heidegger revisits some of philosophy fundamental questions regarding metaphysics, truth and ground and suggests that Western metaphysics is itself an obstacle that impedes the pathway to the meaning of being. For that reason, an overcoming of metaphysics becomes essential in order to initiate a new relation between truth and being. The majority of twentieth-century Continental philosophy judges the Heidegger-Nietzsche dispute in Nietzsche's favour and finds Heidegger's interpretation somewhat contemptible. This book argues that most attempts at placing Heidegger's thought fail to grasp Heidegger's philosophy and accuse him of an inadequate appreciation of reason, ethics and politics. While acknowledging some of the more profound critiques of Heidegger's thought, Louis Blond demonstrates that Heidegger's search for a new foundation for meaning aims at replacing rationality and ethics with a preparatory thinking which hopes to describe a new relationship that rectifies many of the errors of the Western tradition.