Hebrew Scholasticism in the Fifteenth Century 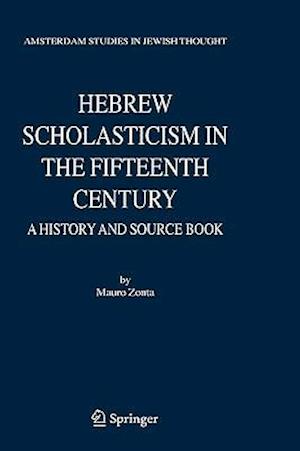 A number of Jewish philosophers active in Spain and Italy in the second half of the 15th century (Abraham Bibago, Baruch Ibn Ya'ish, Abraham Shalom, Eli Habillo, Judah Messer Leon) wrote Hebrew commentaries and questions on Aristotle. In these works, they reproduced the techniques and terminology of Late-Medieval Latin Scholasticism, and quoted and discussed Latin texts (by Albert the Great, Thomas Aquinas, William of Ockham, John Duns Scotus, and other authors) about logic, physics, metaphysics, and ethics. All of these works are still unpublished, and they have not yet been either studied, or translated in modern languages.The aim of this book is to give an idea of the extent and character of this hitherto neglected "Hebrew Scholasticism". After a general historical introduction to this phenomenon, and bio-bibliographical surveys of these philosophers, the book gives complete or partial annotated English translations of the most significant Hebrew Scholastical works. It includes also critical editions of some parts of these texts, and a Latin-Hebrew glossary of Scholastical technical terms.