He Had It Coming

- Four Murderous Women and the Reporter Who Immortalized Their Stories 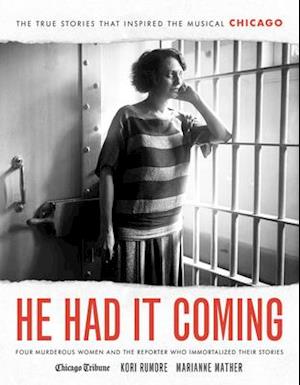 Beulah Annan. Belva Gaertner. Kitty Malm. Sabella Nitti. These are not household names, but they are the real women of Murderess Row, the Cook County Jail's infamous holding block for women waiting to stand trial for murder in the early twentieth century. However, you're probably familiar with Roxie and Velma, the good-time gals at the center of Maurine Dallas Watkins's famous 1926 satirical play Chicago, which she was inspired to write after covering Annan, Gaertner, and the other women of Murderess Row for the Chicago Tribune in 1924. The play was later adapted into the wildly successful 1975 stage musical--the second longest running show in Broadway history--and then the 2002 Academy Award-winning movie. Shocking and sensational, Watkins's story of celebrity criminals and corruption has captivated audiences through the decades. Now, more than 90 years later, the Chicago Tribune has uncovered roughly 60 glass-plate negatives from the arrest and trial of four real women of Murderess Row. These photos tell a very different story--not at all one of glamour, fashion, and celebrity. They show a young mother in jail hugging her two-year-old daughter. They show a confused immigrant woman who doesn't speak English put on trial with no way of understanding her fate. They show women learning to use their images to sway public opinion--and their juries. He Had It Coming collects recently discovered photos, original newspaper clippings, and stories from Watkins as well as new analysis written by Tribune film critic Michael Phillips, theater critic Chris Jones, and columnists Heidi Stevens and Rick Kogan to build a fascinating history of women in crime that takes on new meaning in today's #MeToo moment.