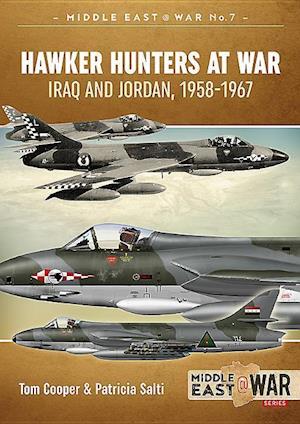 Designed by Sydney Camm as a swept wing, daytime interceptor with excellent manoeuvrability, the Hunter became the first jet aircraft manufactured by Hawker for the Royal Air Force. It set numerous aviation records and saw widespread service with a large number of RAF units in Europe and abroad. When the Royal Air Force received newer aircraft capable of supersonic speeds to perform the interceptor duties, many Hunters were modified and re-equipped for ground-attack and reconnaissance missions instead. Because they were deemed surplus to British requirements, most of these were subsequently refurbished and exported to foreign customers - so also to Iraq and Jordan. Hawker Hunters at War covers every aspect of Hunter's service in the two countries, from in-depth coverage of negotiations related to their export to Iraq and Jordan, to all-important details of their operational service during 1958-67. It culminates in detailed examination of their role in the June 1967 Arab-Israeli War (also known as the 'Six Days War') and extensive tables listing all aircraft delivered and their fates. Almost entirely based on interviews with retired commanding officers and pilots of the former Royal Iraqi Air Force, Iraqi Air Force and Royal Jordanian Air Force - as well as plenty of unpublished official documents from British, Iraqi and Jordanian archives - the narrative is providing an unprecedented insight into a number of contemporary affairs. Profusely illustrated with well over 100 photographs and 15 colour profiles showing all aspects of camouflage, markings and various equipment, Hawker Hunters at War is the ultimate profile of Hunter's colourful and action-packed service in Iraq and Jordan during a period when this legendary type formed the backbone of local air forces.