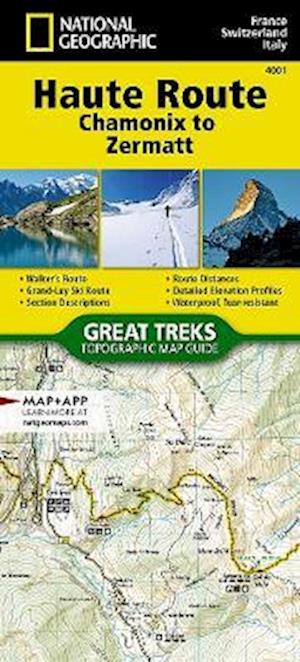 - Waterproof - Tear-Resistant - Topographic MapThe Haute Route--aka the High Route or Mountaineers' Route--traverses the French and Swiss Alps. It was conceived as a summer mountaineering route in the mid-nineteenth century by members of the English Alpine Club. Though originally called The High-Level Route by members of the Alpine Club, in 1911, a group first successfully established a winter route from Bourg St. Pierre to Zermatt on skis and afterwards the name of the route was translated into French. As a result of their success, the French term stuck, and the journey gained a reputation amid skiers and ski mountaineers as a classic must-do winter/spring tour. There is also a non-technical Walker's Haute Route that has gained in popularity and become a classic in and of itself.

This Topographic Map Guide outlines two different variations of the Haute Route from Chamonix, France to Zermatt, Switzerland: one for hikers and one for skiers. The northernmost route or, Walker's Route, depicted on the map travels north from Chamonix and traverses through the Alps all the way to Zermatt. The ski route depicted on this map illustrates the Grand Lui variation, which is the longest and most technical route that eliminates the road links of the Verbier and Classic variations.

Though the term Haute Route has been widely used for many multi-day, hut-to-hut alpine tours, the Chamonix-Zermatt Haute Route remains the original. Thus, whether you choose to wear skis or hiking boots, the Haute Route is an adventure unlike any other.

More convenient and easier to use than folded maps, but just as compact and lightweight, National Geographic's Topographic Map Guide booklets are printed on Backcountry Tough waterproof, tear-resistant paper with stainless steel staples. A full UTM grid is printed on the map to aid with GPS navigation