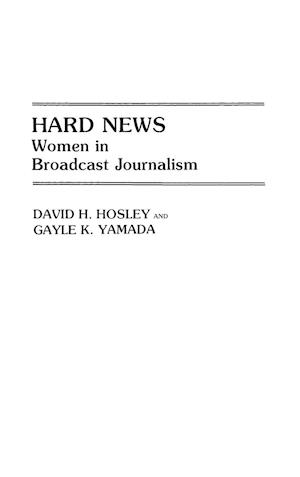 A major scholarly and readable history of women in broadcast news, covering the broadcast journalistic roles of women from the 1920s through the mid-1980s. Authors Hosley and Yamada, both with extensive professional experience in broadcasting and broadcast news as well as serving on the faculty of Stanford University's Mass Media Institute, have produced a heavily researched and well-written book, which gives attention not only to the more familiar names but also to the many women whose pioneer work in broadcast journalism had led to gradual acceptance of women in what had been considerd a male field. Choice There are a lot of names in this book. Some are immediately recognizable . . . other names are virtually unknown, making this book a valuable reference text for students interested in researching the careers of women broadcasters who have been all but forgotten. The authors, both of whom have extensive backgrounds in broadcasting, have done a commendable job of identifying women who have pioneered in electronic journalism. . . Indeed, this book is so engrossing one only wishes that it were longer. The authors touch on complex issues--such as the impact of the Civil Rights Act of 1964 and the FCC's decision to mandate affirmative action programs to remedy past discrimination--that call for more complete treatment in future works. Yet this book is an excellent starting point for serious study of women and broadcast news. It is highly recommended for courses in communications history and broadcasting and women's studies. Journalism QuarterlyThis is the first book to tell the story of women in broadcast news. It presents a historical overview of how the evolution of women in news has contributed to, and reflected, changes in our society. It identifies the newswomen who were pioneers in radio and television's developing years and focuses on those whose careers have had the greatest influence on American society through their impact on radio and television. Included are profiles of the major trail-blazers in the industry, such as Sigrid Schultz, the first female radio foreign correspondent; Helen Sioussat, the first woman network news executive; Dorothy Fuldheim, the first woman to anchor a news program; and network correspondent Pauline Frederick, the dean of women electronic journalists.