Handbook of Scales for Research in Crime and Delinquency 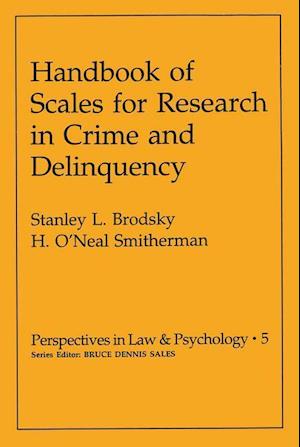 In contrast to the great diversity of other crime and delinquency research measures, those drawn from the CPI and the MMPI have much in common. They are taken from standardized instruments administered under controlled conditions, with known stimulus properties and validity indicators. The CPI and MMPI measures will frequently be instruments of choice in research on personality and psychodynamics of offenders. CHAPTER 6 Law Enforcement and Police This chapter encompasses a variety of scales that refer to law enforcement or police agencies. Unfortunately, in the case of many scales, these terms are used simply with the assumption that the respondents understand the concepts and use them in the same way as researchers. In other cases, however, specific policing functions are identified and described. As noted in Chapter 3, a standard order of scale presentation is followed. First the attitudes scales are presented, followed by the behavior ratings, per sonality measures, milieu ratings, prediction measures and finally the very broad category of description. After the reviews are completed within each subcategory, other scales in that category are listed. (See Chapter 2 for a description of the criteria that were used in deciding upon whether a scale would be reviewed or simply listed. ) Listed scales are presented by title and bibliographic reference, followed by a very brief description.