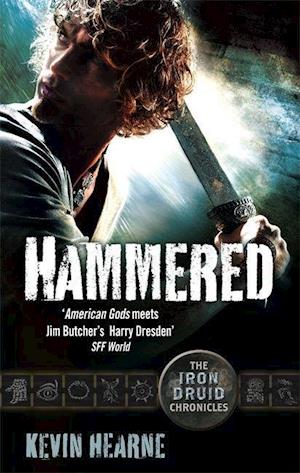 ***OVER A MILLION COPIES OF THE IRON DRUID BOOKS SOLD***'American Gods meets Jim Butcher's Harry Dresden' SFF WorldThor, the Norse god of thunder, is worse than a blowhard and a bully - he's ruined countless lives and killed scores of innocents. After centuries, Viking vampire Leif Helgarson is ready to get his vengeance, and he's asked his friend Atticus O'Sullivan, the last of the Druids, to help take down this Norse nightmare.One survival strategy has worked for Atticus for more than two thousand years: stay away from the guy with the lightning bolts. But things are heating up in Atticus's home base of Tempe, Arizona. There's a vampire turf war brewing, and Russian demon hunters who call themselves the Hammers of God are running rampant. Despite multiple warnings and portents of dire consequences, Atticus and Leif journey to the Norse plain of Asgard, where they team up with a werewolf, a sorcerer, and an army of frost giants for an epic showdown against vicious Valkyries, angry gods, and the hammer-wielding Thunder Thug himself.Praise for the Iron Druid Chronicles:'Atticus and his crew are a breath of fresh air! . . . I love, love, love this series' My Bookish Ways'Entertaining, steeped in a ton of mythology, populated by awesome characters' Civilian Reader'This is one series no fantasy fan should miss. Mystery, suspense, magic and mayhem' SciFiChickThe Iron Druid ChroniclesHounded Hexed HammeredTrickedTrappedHuntedShatteredStakedScourgedBesieged (short stories)HAVE YOU TRIED . . .Kevin Hearne's epic fantasy novel A PLAGUE OF GIANTS - described by Delilah S. Dawson as 'a rare masterpiece that's both current and timeless . . . merging the fantasy bones of Tolkien and Rothfuss with a wide cast of characters who'll break your heart'. Out now!