- From Computing to Relativity Theory Through Algebraic Logic (2021) 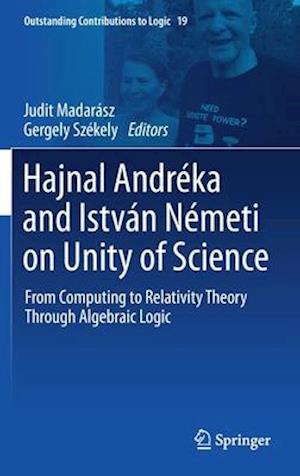 This book features more than 20 papers that celebrate the work of Hajnal Andreka and Istvan Nemeti. It illustrates an interaction between developing and applying mathematical logic. The papers offer new results as well as surveys in areas influenced by these two outstanding researchers. They also provide details on the after-life of some of their initiatives.Computer science connects the papers in the first part of the book. The second part concentrates on algebraic logic. It features a range of papers that hint at the intricate many-way connections between logic, algebra, and geometry. The third part explores novel applications of logic in relativity theory, philosophy of logic, philosophy of physics and spacetime, and methodology of science. They include such exciting subjects as time travelling in emergent spacetime. The short autobiographies of Hajnal Andreka and Istvan Nemeti at the end of the book describe an adventurous journey from electric engineering and Maxwell's equations to a complex system of computer programs for designing Hungary's electric power system, to exploring and contributing deep results to Tarskian algebraic logic as the deepest core theory of such questions, then on to applications of the results in such exciting new areas as relativity theory in order to rejuvenate logic itself.