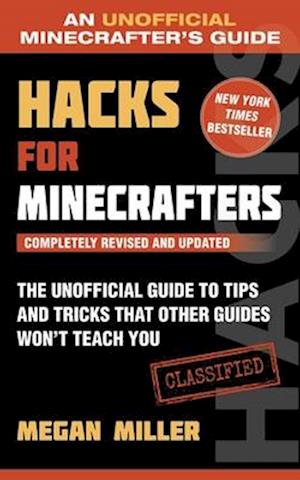 A New York Times bestseller, now in paperback for the first time and completely revised and updated With more than 100 million registered players, Minecraft has taken control of gamers all over the world. With Hacks for Minecrafters, you'll be able to take back that control Only with the help found in Hacks for Minecrafters will you be able to craft your world exactly how you want it to look, all while discovering the hidden gems of the game. Now being released in paperback, Hacks for Minecrafters has been updated for Minecraft 1.12, the World of Color update that added new function and crafting systems, illusioners, parrots, and building materials like glazed terracotta and concrete. In this hacker's guide, you'll find expertise on: Mining--including diamonds and rare minerals Farming--growing tricks, seed hacks, and the best tree-replanting techniques Battle--for the best weapons and armor Magic--top crafting hacks and book modifiers

You will never be stuck again With more than one hundred full-color screenshots of in-game footage, you'll be able to carefully follow every tip with precision. It doesn't matter if you're playing on a PC, mobile device, or home console; with Hacks for Minecrafters, you'll be beating the game in no time. Every block has been accounted for, all living entities have been taken into consideration, and all modes of game-play are covered