- Music, Theory and Nationalism in the Mrdang aur Tabla Vadanpaddhati of Gurudev Patwardhan 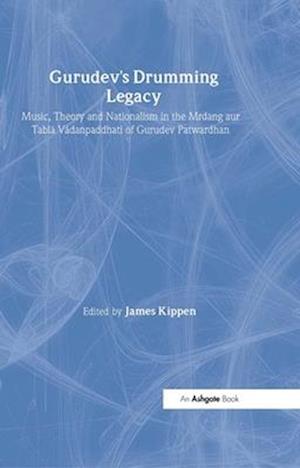 The 1903 Mrdang aur Tabla Vadanpaddhati is a revelatory text that has never been translated or analysed. It is a manual for playing the two most important drums of North Indian (Hindustani) music, the pakhavaj (mrdang) and the tabla. Owing to its relative obscurity, it is a source that has never been discussed in the literature on Hindustani music. Its author, Gurudev Patwardhan, was Vice Principal of V.D. Paluskar's first music school in Lahore from its inception in 1901 to 1908. Professor James Kippen provides the first translation of this immensely important text and examines its startling implications for rhythmic and metric theory. It is the earliest work on Indian drumming to contain a notation sufficiently precise to allow definitive reconstruction. The compositions are of considerable musical interest, for they can be readily realized on the tabla or pakhavaj. Kippen sets the work and objectives of the original author in the context of a rich historical, social and political background. By also discussing radical differences in the second edition of 1938, published by Gurudev's nephew, the vocalist Vinayakrao Patwardhan, Kippen illuminates the process by which 'tabla theory' was being created in the early 20th century. Both Patwardhans were enthusiastic supporters of Paluskar's nationalist imperatives, and active participants in his drive to institutionalize music, codify and publish notations of it, and promote a modern, Hindu vision of India wherein its identity could once again be linked to a glorious golden age in distant antiquity.

Forfattere
Bibliotekernes beskrivelse "Mrdang aur Tabla Vadanpaddhati", a revelatory text published in 1903, is a manual for playing the pakhavaj (mrdang) and the tabla. This book is a translation of this text, and examines its implications for rhythmic and metric theory. It illuminates the process by which 'tabla theory' was created in the early 20th century.