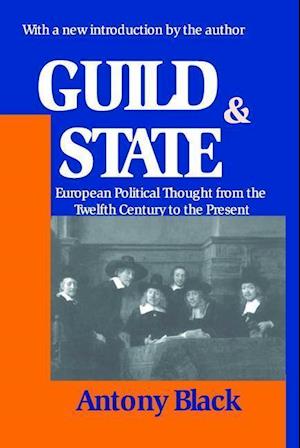 Guild and State examines the values of social solidarity and fraternity that emerged from medieval guilds and city-communes, and the effect of traditional corporate organization of labor on socioeconomic attitudes and theories of the state. What ordinary guildsmen and townsmen thought about these issues can be gleaned from chronicles, charters, and reported slogans. But in tracing attitudes toward the guilds of early Germanic times to today's equivalent-trade unions-a distinction must be made between popular "ethos" and learned "philosophy." In Europe, from the twelfth to the seventeenth centuries, the corporate organization of labor and of town-market communities developed side-by-side with the ideals of personal liberty, market freedom, and legal equality. Both affected the ideology of the European commune and city-state in specific and discernible ways. Self-governing labor organizations and civil freedom developed together as coherent practices. The values of mutual aid and craft honor on the one hand, and of personal freedom and legal equality on the other, formed the moral infrastructure of our civilization. Alternate ideals balanced, harmonized, and even cross-fertilized one another-as in the principle of freedom of association.Contrary to preconceptions, however, corporate values were seldom expressed philosophically in the Middle Ages. Political theory and the world of learning from the start emphasized liberal values. It was only after the Reformation that guild and communal values found expression in political theory. Even then only a few philosophers acknowledged that solidarity and exchange-the poles around which the values of guild and civil society, respectively, rotate-are not opposites but complementary, and attempted to weave these together into a texture as tough and complex as that of urban society itself. The Enlightenment and industrialization led to an apotheosis of liberal values. Guilds disappeared and were only in part replaced by labor unions; the values of market exchange have since been in the ascendant-though Hegel, Durkheim, and more recently, advocates of liberal corporatism maintain the possibility of a symbiosis between corporate and liberal values. In Guild and State there emerges an alternative history of political thought, which will be fascinating to the general as well as the specialist reader.