Guided By The Irish Gods

indgår i serie The Second Renaissance 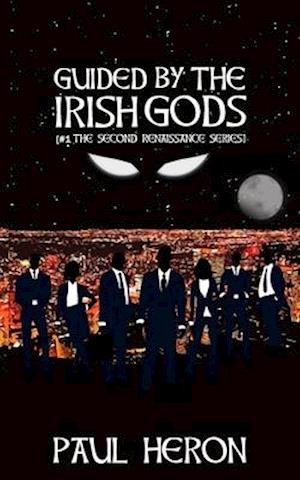 Irish myths and legends are not real, right? There's no such thing as Bruce's Cave on Rathlin Island, situated on the northeast coast of Ireland. There certainly couldn't be any truth to a 350-year-old event which has led to one family seizing control of every world leader on the planet, could there? One guy wishes it wasn't true. Michael O'Hagan believes he's just a normal seventeen-year-old student. He wishes.Growing up in culturally divided Belfast, he doesn't like the society he calls home. He escapes the violent reality of Northern Ireland by diving into stories of Irish myths and legends, unaware that he is about to become a pivotal part of that world. Following a life-threatening assault, Michael writes a story as part of a school project. A story he titles: "I Want to Change the World." Little did he know that he was, in fact, the chosen one and leader of a group of seven demi-gods - each from a different country - that will not only change the world but save the world.The seven are invited to attend a prestigious university in England, believing they were there to develop their powers. That was not the case. At a local art gallery, they step through a portal where they meet an Italian Baroque artist who was murdered in 1665 and is now the ruling deity of the Irish pantheon: the Tuatha de Danann. Elisabetta Sirani explains to them how a visitor to Ireland became one of the land's most powerful goddesses. She tells them why she was murdered, and informs them that her murderer's family has become a secret organisation, led by one of the most powerful gods - the God of the Otherworld and leader of the Fomorians; their plan is to take over the earth, destroying the human race in the process. It's the Otherworld's war between the Tuatha de Danann and the Fomorians spilling over into the earth.Michael quickly comes to realise that he's creating a modern day story that will go down in history as another tale of not only Irish mythology, but international mythology. Elisabetta puts a charm on the seven, dressing them in suits to allow them to blend in with the political world that's become infected by the Fomorians. She sends them back to earth with their powers enhanced.So, on their first day of meeting, these guys are thrust into a set of circumstances and all they have is each other. They must work together - in secret - to stop this organisation. They are all terrified. They cannot contact their families or friends from their home countries because of the danger it poses. An emotional rollercoaster for them all. This story shows the bond complete strangers can develop when the odds are stacked against them. And for Michael, will he live to regret ever wanting to change the world?