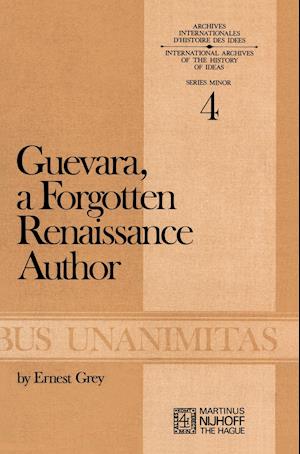 In many ways, Fray Antonio de Guevara (1480?-1545) is the forgotten man of the Spanish Renaissance. This century has seen the publication of four of his works, Aviso de privados (Paris, 1912), Menosprecio de Corte (Madrid, 1952), Epistolas familiares (Madrid, 1950), and Una Decada de Cesares (Chapel Hill, Nmth Carolina, 1966). A good modem edition of his most important work, Libro aureo de Marco Aurelio, is available only in a scholarly French magazine (Revue Hispanique, 76 [1929]), and its enlarged version, Relox de principes, can be found in its entirety only in the major libraries of the civilized world. Yet, once this writer was the most popular author of Europe whose works were con- sidered the most widely read after the Bible, according to a frequently quoted statement of Merik Casaubon. Regardless of one's personal opinion about the merits of his books, no one will quarrel with the propo- sition that additional studies dealing with the writings of Guevara are desirable. The acceptance of Guevara's writings, in spite of their popularity, was by no means unanimous.The purpose of this book is to present a detailed history of the differing reactions to the author and to explore their back- ground and causes. We shall also note how the polemics about Guevara reflect the changing intellectual climate of the passing centuries.