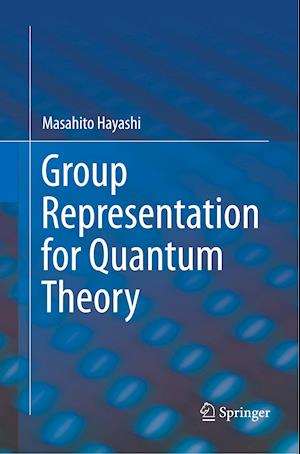 This book explains the group representation theory for quantum theory in the language of quantum theory. As is well known, group representation theory is very strong tool for quantum theory, in particular, angular momentum, hydrogen-type Hamiltonian, spin-orbit interaction, quark model, quantum optics, and quantum information processing including quantum error correction. To describe a big picture of application of representation theory to quantum theory, the book needs to contain the following six topics, permutation group, SU(2) and SU(d), Heisenberg representation, squeezing operation, Discrete Heisenberg representation, and the relation with Fourier transform from a unified viewpoint by including projective representation. Unfortunately, although there are so many good mathematical books for a part of six topics, no book contains all of these topics because they are too segmentalized. Further, some of them are written in an abstract way in mathematical style and, often, the materials are too segmented. At least, the notation is not familiar to people working with quantum theory.Others are good elementary books, but do not deal with topics related to quantum theory. In particular, such elementary books do not cover projective representation, which is more important in quantum theory. On the other hand, there are several books for physicists. However, these books are too simple and lack the detailed discussion. Hence, they are not useful for advanced study even in physics. To resolve this issue, this book starts with the basic mathematics for quantum theory. Then, it introduces the basics of group representation and discusses the case of the finite groups, the symmetric group, e.g. Next, this book discusses Lie group and Lie algebra. This part starts with the basics knowledge, and proceeds to the special groups, e.g., SU(2), SU(1,1), and SU(d). After the special groups, it explains concrete applications to physical systems, e.g., angular momentum, hydrogen-type Hamiltonian, spin-orbit interaction, and quark model. Then, it proceeds to the general theory for Lie group and Lie algebra. Using this knowledge, this book explains the Bosonic system, which has the symmetries of Heisenberg group and the squeezing symmetry by SL(2,R) and Sp(2n,R). Finally, as the discrete version, this book treats the discrete Heisenberg representation which is related to quantum error correction. To enhance readers' undersnding, this book contains 54 figures, 23 tables, and 111 exercises with solutions.