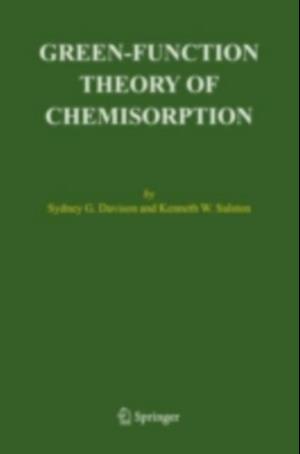 Prefaces are like speeches before the c- tain; they make even the most self-forgetful performers seem self-conscious. - William Allen Neilson The study of phenomena and processes at the phase boundaries of m- ter is the realm of the surface scientist. The tools of his trade are drawn from across the spectrum of the various scienti?c disciplines. It is therefore interesting that, in investigating the properties of such boundaries, the s- facist must transcend the interdisciplinary boundaries between the subjects themselves. In this respect, he harkens back to the days of renaissance man, when knowledge knew no boundaries, and was pursued simply for its own sake, in the spirit of enlightenment. Chemisorption is a gas-solid interface problem, involving the inter- tion of a gas atom with a solid surface via a charge-transfer process, during which a chemical bond is formed. Because of its importance in such areas as catalysis and electronic-device fabrication, the subject of chemisorption is of interest to a wide range of surfacists in physics, chemistry, materials science, as well as chemical and electronic engineering. As a result, a vast lite- ture has been created, though, despite this situation, there is a surprising scarcity of books on the subject. Moreover, those that are available tend to be experimentally oriented, such as, Chemisorption: An Experimental - proach (Wedler 1976). On the theoretical side, The Chemisorption Bond (Clark 1974) provides a good introduction, but is limited in not describing the more advanced techniques presently in use.