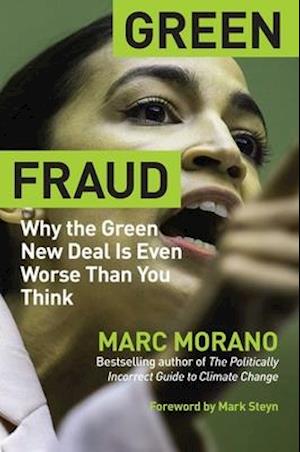 Marc Morano's analysis of the proposed Green New Deal is eye-opening and damning. In his new book, Green Fraud: Why The New Green Deal Is The Wrong Solution To The Wrong Problem, Morano exposes the program as a far-left agenda filled with progressive policies disguised as a way to save the planet. No matter what the environmental scare-of-the-day may be, Morano says, the same solution is always proposed -- and that solution should scare us. Morano clearly shows how the Green New Deal will lay a path for "global governance," resulting in less freedom, less sovereignty, massive government bureaucracy, and significant, crippling wealth redistribution. Drawing on past "new deals" to illustrate the impact such "deals" have on the United States, Morano will explain how FDR's New Deal and Lyndon Johnson's "Great Society" really impacted American society. And this latest big government program is no different. In Green Fraud, Morano reveals:

How the Green New Deal's objectives extend far beyond the environment -- including free college; "healthy food" for all; "safe, affordable, adequate housing" provided by the government; and other far-left agenda items That in Europe, where climate policies are years ahead of the United States, energy rationing, low economic growth, and rising costs are leading to misery and even death among Europeans How even Green New Deal allies such as the New York Times and Washington Post have outed the legislation as a wish-list of progressive policies How America can and must defeat the Green New Deal and restore sanity to the climate and energy policy discussion