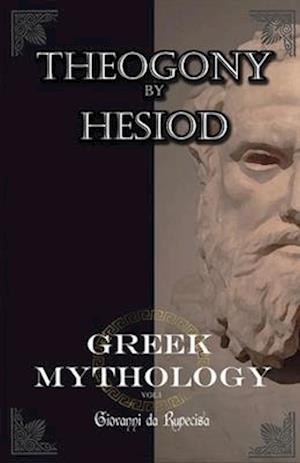 True Greek Mythology Revealed. Discover now the mystery of the true story of the birth of the Olympian Gods,revealed 2700 years ago by the Muses to the only Rhapsodus of the Gods: Hesiod. Many have tried to narrate the myth of the gods, but only one is the chosen one... When beginning the study of ancient Greek mythology, it is often easy to come across books or texts of dubious authority and very often manyreaders complain about how little depth the texts can be, or how they are theresult of copying and pasting from blogs found on the internet. this text is my new translation from ancient Greek of the "Hesiod's Theogony", the source that all historians consider to be the most authoritative source for the study of the myths of ancient Greece, but it is also considered to be the oldest written collection of the oral traditions of the mythologies of antiquity. However, this new translation differs from those you will normally find on the market, In fact, only in this edition can you find: •a free downloadable Bonus within the text, a 40-page pdf with the original text in ancient Greek, worth $19 •a new simplified translation from ancient Greek, which will allow you to breakout of the academic mould, leaving you total autonomy in interpreting the text,without trivialising the content, but rather enhancing the experience and thenarrative Pathos evoked by the wise verses of Hesiod of Ascra. •the possibility of letting oneself be guided by the narrative experience of the text, without having to jump through annoying time jumps that can makereading too difficult or boring. •Ananalysis of the esoteric keys within the text to begin your own personalwork of interpretation. •references and historical analysis that will allow you to better understand the periodin which the Theogony was born, understand the literal uses and analysis of thetext. the value of this text could easily exceed 49€, however... I have decided to literally ruin myself and "give" this text to all the people who want to acquire the knowledge of the ancien tmyths... I care a lot about culture, and I am very pleased when it is spread... for this reason I have decided to apply the following prices: Paperback: $19 instead of $49 But be careful, because I am experimenting with these prices, I don't know how long I will keep the prices so low, I will definitely raise them in the future. So take advantage of it now, Scroll up and get your copy now with just one click!