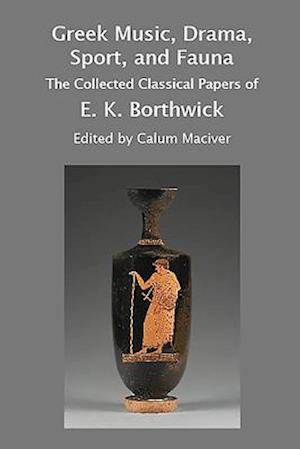 PROFESSOR E. KERR BORTHWICK (1925-2008) studied Classics at Aberdeen University and at Christ's College Cambridge before being appointed Lecturer, first at the University of Leeds and then, in 1955, at Edinburgh University, where he remained for the rest of his career. He headed the Greek Department at Edinburgh from 1980 until his retirement in 1989 and was appointed to a Personal Chair in Greek in 1983.Ancient music and Greek drama were the main focuses of E.K. Borthwick's academic output, and he had a particular flair for pinpointing, elucidating, and solving textual difficulties. But his interests ranged much further, as the works collected in this volume demonstrate; and his papers intrigue and entertain where a less lively pen might have made the points at issue seem dry and abstruse. Taken together, his articles constitute a stellar example of what a classicist with professional training as a philologist, an enquiring mind, an exact eye for detail, and the ability to communicate enthusiasm, can achieve in a life's work.The volume opens with Professor Borthwick's inaugural lecture on Homer,`Odyssean Elements in the Iliad' (Edinburgh, 1983). The editor, Dr. Calum Maciver, has then arranged Borthwick's 63 scholarly articles, published between 1959 and 2003, thematically under six headings: Ancient Music, The Pyrrhic Dance, Drama, Zoologica, Ancient Sport, Miscellanea. The volume includes a consolidated bibliography of all works cited, a general index, an index of Greek words, and an index locorum. A selection of the titles under each of the headings indicates the range and variety of Kerr Borthwick's scholarship:Ancient Music: - a Neglected Technical Term in Greek MusicNotes on the Plutarch De Musica and the Cheiron of Pherecrates`Music While You Work'in Philodemus De Musica,The Pyrrhic Dance: Trojan Leap and Pyrrhic Dance in Euripides' AndromacheThe Dances of Philocleon and the Sons of Carcinus in Aristophanes'WaspsP. Oxy. 2738: Athena and the Pyrrhic Dance;Drama: Two Scenes of Combat in EuripidesA Phyllobolia in Aristophanes'Clouds?Euripides Erotodidaskalos? A Note on Aristophanes Frogs 957Zoologica: A Grasshopper's Diet- Notes on an Epigram of Meleager and a Fragment of EubulusLimed Reeds in Theocritus, Aristophanes, and PropertiusSeeing Weasels: The Superstitious Background of the Empusa Scene in the FrogsStarting a Hare: A Note on Machon, Fr. 15Bee Imagery in PlutarchBees and Drones in Aristophanes, Aelian and EuripidesAncient Sport: The Gymnasium of Bromius- a Note on Dionysius Chalcus, Fr. 3Death of a Fighting CockThe Cynic and the StatueMiscellanea: Notes on"The Superstitious Man" of TheophrastusDio Chrysostom on the Mob at AlexandriaThe Scene on the Panagjurischte Amphora: A New SolutionA Note on Some Unusual Greek Words for EyesAristophanes and Agathon: A Contrast in Hair StylesA`Not Too Severe' Epigram of GaetulicusSocrates, Socratics, and the Word