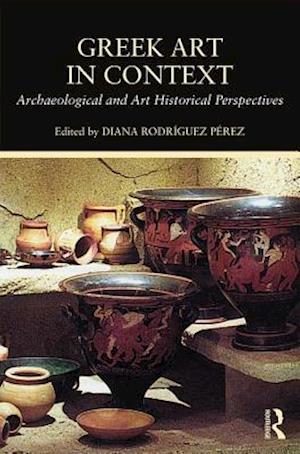 This volume gathers together selected contributions which were originally presented at the conference 'Greek Art in Context' at the University of Edinburgh in 2014. Its aim is to introduce the reader to the broad and multifaceted notion of context in relation to Greek art and, more specifically, to its relevance for the study of Greek sculpture and pottery from the Archaic to the Late Classical periods. What do we mean by 'context'? In which ways and under what circumstances does context become relevant for the interpretation of Greek material culture? Which contexts should we look at - viewing context, political, social and religious discourse, artistic tradition . . .? What happens when there is no context? These are some of the questions that this volume aims to answer.The chapters included cover current approaches to the study of Greek sculpture and pottery in which the notion of 'context' plays a prominent role, offering new ways of looking at familiar issues. It gathers leading scholars and early career researchers from different backgrounds and research traditions with the aim of presenting new insights into archaeological and art historical research. Their chapters contribute to showcase the vitality of the discipline and will serve to stimulate new directions for the study of Greek art.