Greatest of All Time. A Tribute to Muhammad Ali 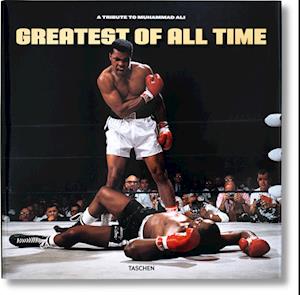 Forfattere
Forlagets beskrivelse "An amazing book...all the iconic photographs that people took of The Champ." -Barack ObamaGREATEST OF ALL TIME: A TRIBUTE TO MUHAMMAD ALI is a book with the power, courage, depth, creativity, and dazzling energy of its extraordinary subject. Slimmed down from the heavyweight Collector's Edition, this bantamweight edition is smaller in size, but pulls no punches on its expertise, passion, and insight on The Champ.With thousands of images, including photography, art, and memorabilia and two gatefold sequences, the book pays vivid tribute to The Greatest both in and outside of the ring. Original essays and five decades' worth of interviews and writing explore the courage, convictions, and extraordinary image-building that made Ali one of the most recognizable and inspirational individuals on the planet, an icon not only as an extraordinary athlete, but also as an impassioned advocate of social justice, interfaith understanding, and peace.
Bibliotekernes beskrivelse This bantamweight edition of GOAT slims down the heavyweight champion Collector's Edition from 50 to 15 pounds. Smaller in size but not in impact, the book contains all the same expert essays, compelling interviews, thousands of images, and two gatefold sequences to create one epic tribute to Ali, as powerful and vibrant as the man himself.