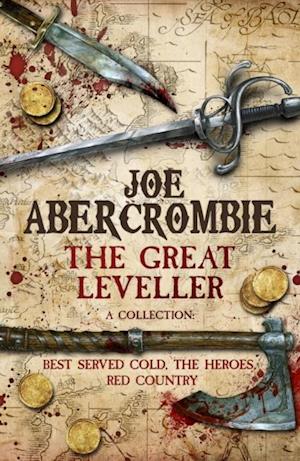 Collected together for the first time, here are the three hard-hitting standalone novels set in the world of Joe Abercrombie's bestselling FIRST LAW trilogy.BEST SERVED COLD: War may be hell but for Monza Murcatto, the Snake of Talins, the most feared and famous mercenary in Duke Orso's employ, it's a damn good way of making money too. Her victories have made her popular - a shade too popular for her employer's taste. Betrayed, thrown down a mountain and left for dead, Murcatto's reward is a broken body and a burning hunger for vengeance. Whatever the cost, seven men must die.THE HEROES: Over three bloody days of battle, the fate of the North will be decided. But with both sides riddled by intrigues, follies, feuds and petty jealousies, it is unlikely to be the noblest hearts, or even the strongest arms that prevail. Three men. One battle. No Heroes.RED COUNTRY: Shy South hoped to bury her bloody past and ride away smiling, but she'll have to sharpen up some bad old ways to get her family back, and she's not a woman to flinch from what needs doing. She sets off in pursuit off her family's killers with only a pair of oxen and her cowardly old stepfather Lamb for company. But it turns out Lamb's buried a bloody past of his own, and out in the lawless Far Country, the past never stays buried.