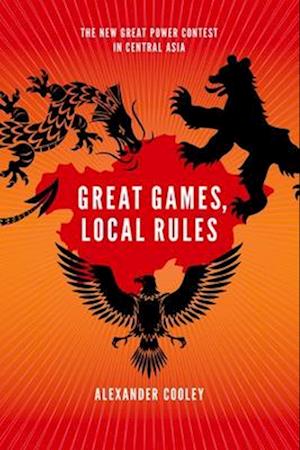 The struggle between Russia and Great Britain over Central Asia in the nineteenth century was the original "great game." But in the past quarter century, a new "great game" has emerged, pitting America against a newly aggressive Russia and a resource-hungry China, all struggling for influence over the same region, now one of the most volatile areas in the world: the long border region stretching from Iran through Pakistan to Kashmir. In Great Games, Local Rules, Alexander Cooley, one of America's most respected international relations scholars, explores the dynamics of the new competition for control of the region since 9/11. All three great powers have crafted strategies to increase their power in the area, which includes Afghanistan and the former Soviet republics of Turkmenistan, Uzbekistan, Kyrgyzstan, and Kazakhstan. Each nation is pursuing important goals: basing rights for the US, access to natural resourcesfor the Chinese, and increased political influence for the Russians. However, overlooked in all of the talk about this new great game is fact that the Central Asian governments have proven themselves critical agents in their own right, establishing local rules for external power involvement that serve to fend off foreign interest. As a result, despite a decade of intense interest from the United States, Russia, and China, Central Asia remains a collection of segmented states, and the external competition has merely reinforced the sovereign authority of theindividual Central Asian governments. A careful and surprising analysis of how small states interact with great powers in a vital region, Great Games, Local Rules greatly advances our understanding of how global politics actually works in the contemporary era.