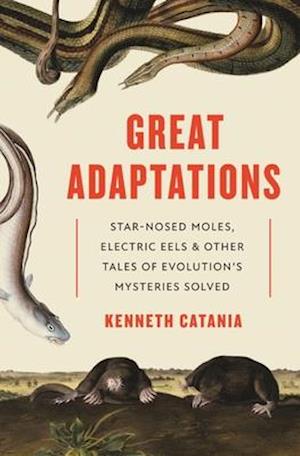 The irresistible enthusiasm of Great Adaptations couldn't come at a better time.--David P. Barash, Wall Street Journal Be very amazed.--Carl Safina, author of Beyond Words and Becoming Wild How one scientist unlocked the secrets behind some of nature's most astounding animals From star-nosed moles that have super-sensing snouts to electric eels that paralyze their prey, animals possess unique and extraordinary abilities. In Great Adaptations, Kenneth Catania presents an entertaining and engaging look at some of nature's most remarkable creatures. Telling the story of his biological detective work, Catania sheds light on the mysteries behind the behaviors of tentacled snakes, tiny shrews, zombie-making wasps, and more. He shows not only how studying these animals can provide deep insights into how life evolved, but also how scientific discovery can be filled with adventure and fun. Beginning with the star-nosed mole, Catania reveals what the creature's nasal star is actually for, and what this tells us about how brains work. He explores how the deceptive hunting strategy of tentacled snakes leads prey straight to their mouths, how eels use electricity to control other animals, and why emerald jewel wasps make zombies out of cockroaches. He also solves the enigma of worm grunting--a traditional technique in which earthworms are enticed out of the ground--by teaming up with professional worm grunters. Catania demonstrates the merits of approaching science with an open mind, considers the role played by citizen scientists, and illustrates that most animals have incredible, hidden abilities that defy our imagination. Examining some strange and spectacular creatures, Great Adaptations offers a wondrous journey into nature's grand designs.