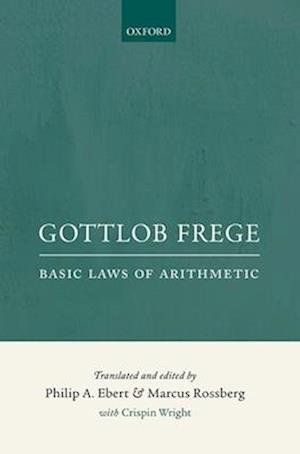 Constitutionalism: Past, Present, and Future is the definitive collection of Dieter Grimm's most influential writings on constitutional thought and interpretation. The essays included in this volume explore the conditions under which the modern constitution could emerge; they treat the characteristics that must be given if the constitution may be called an achievement, the appropriate way to understand and interpret constitutional law under currentconditions, the function of judicial review, the remaining role of national constitutions in a changing world, as well as the possibility of supra-national constitutionalism.Many of these essays have influenced the German and European discussion on constitutionalism and for the first time, much of the work of one of German's leading scholars of public law will be available in the English language.The German philosopher and mathematician Gottlob Frege (1848-1925) was the father of analytic philosophy and to all intents and purposes the inventor of modern logic. Basic Laws of Arithmetic, originally published in German in two volumes (1893, 1903), is Freges magnum opus. It was to be the pinnacle of Freges lifes work. It represents the final stage of his logicist project the idea that arithmetic and analysis are reducible to logic and containshis mature philosophy of mathematics and logic. The aim of Basic Laws of Arithmetic is to demonstrate the logical nature of mathematical theorems by providing gapless proofs in Frege's formal system using only basic laws of logic, logical inference, and explicit definitions. The work contains a philosophicalforeword, an introduction to Frege's logic, a derivation of arithmetic from this logic, a critique of contemporary approaches to the real numbers, and the beginnings of a logicist treatment of real analysis. As is well-known, a letter received from Bertrand Russell shortly before the publication of the second volume made Frege realise that his basic law V, governing the identity of value-ranges, leads into inconsistency. Frege discusses a revision to basic law V written in response to Russellsletter in an afterword to volume II.The continuing importance of Basic Laws of Arithmetic lies not only in its bearing on issues in the foundations of mathematics and logic but in its model of philosophical inquiry. Frege's ability to locate the essential questions, his integration of logical and philosophical analysis, and his rigorous approach to criticism and argument in general are vividly in evidence in this, his most ambitious work.Philip Ebert and Marcus Rossberg present the first full English translation of both volumes of Freges major work preserving the original formalism and pagination. The edition contains a foreword by Crispin Wright and an extensive appendix providing an introduction to Frege's formal system by Roy T. Cook.

Forfattere
Bibliotekernes beskrivelse The authoritative collection of Dieter Grimm's influential essays on modern constitutionalism.This is the first complete English translation of Gottlob Frege's Grundgesetze der Arithmetik (1893 and 1903), with introduction and annotation. As the culmination of his ground-breaking work in the philosophy of logic and mathematics, Frege here tried to show how the fundamental laws of arithmetic could be derived from purely logical principles.