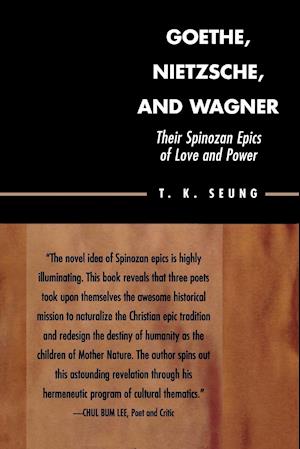 The author reads Goethe's Faust as the first epic written under Spinoza's influence. He shows how its thematic development is governed by Spinoza's pantheistic naturalism. He further contends that Wagner and Nietzsche have tried to surpass their mentor Goethe's work by writing their own Spinozan epics of love and power in The Ring of the Nibelung and Thus Spoke Zarathustra. These Spinozan epics are designed to succeed the Christian epics in the Western literary tradition. Whereas the Christian epics dared to groom human beings for their destiny in the supernatural world, the Spinozan epics try to reinstate humanity as the children of Mother Nature and overcome their alienation from the natural world, which had been dictated by the long reign of Christianity. However, it has been well noted that none of these new epics seems to hang together thematically as a coherent work. By his Spinozan reading, the author not only demonstrates the thematic unity of each of them singly, but further illustrates their thematic relation with each other.