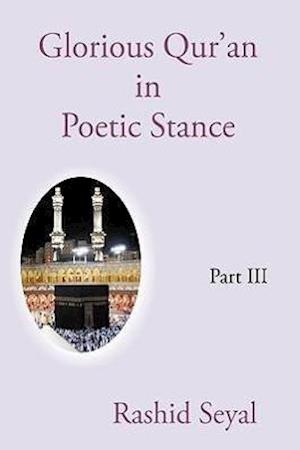 The Holy Scripture of the Qur'an is enticing and enchanting, captivating and concerning. It provides unfeigned direction for the virtuous. It gives a detailed enunciation of the faith. It teaches men to adhere to a common belief and conviction that is deeper than human consciousness. In Glorious Qur'an in Poetic Stance, Part III, author Rashid Seyal provides detailed elucidations about this ancient text-a text that has appealed to a broad audience over a long period of time. Seyal's work on Qur'anic poetry and the philosophical interpretation in light of modern day science has given a new direction to understanding the Holy Scripture. The Glorious Qur'an in Poetic Stance, Part III elucidates on subjects surrounding the perfect creation: Big Bang Cosmic red shift Creation of grand universe and life Black holes Shape of the earth Mountains and earthquakes Perfection in human creation Written in three languages-English poetry, Arabic, and Urdu translations-Glorious Qur'an in Poetic Stance, Part III strives to make sense of a text filled with the puzzle and riddle of interpretation.